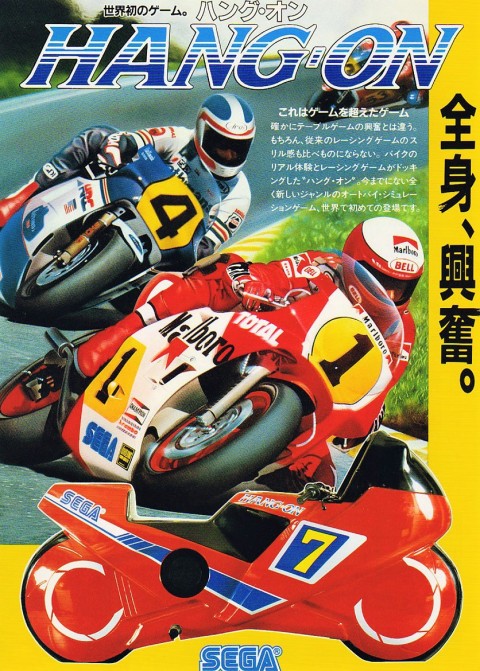 Before going on, let’s take a trip in time and space to understand the full extent of the importance of Hang-On. Japan, July 1985: the nation is in the middle of a motorcycle fever, a vehicle for leisure and recreation. Improving its road network, with magnificent roads, the commercial war of the Japanese motorcycle manufacturers for providing better products and, of course, an improved purchasing power are the main causes of this boom from an analytical point of view.

However, if we look at it from a more passionate side, the interest caused by the Motorcycle World Championship and the Suzuka 8 hours, the success of manga and original animation movie Bari Bari Densetsu and the popularity of stunning sports bikes with two-stroke engines (Suzuki RG Gamma, NSR Honda, Yamaha TZR…) were the fuel that caused the explosion. The boom of the motorcycle.

However, the analysis of this phenomenon would not be complete without mentioning one final element of the equation, what interests us: the launch of SEGA’s Hang-On.

The development of this game, a pioneer in many ways, was born as a result of SEGA’s determination to erase the dark, smoky and problematic image of the Game Center at the time, and of the talent and genius of a young man who had just joined the company: the now famous Yu Suzuki. 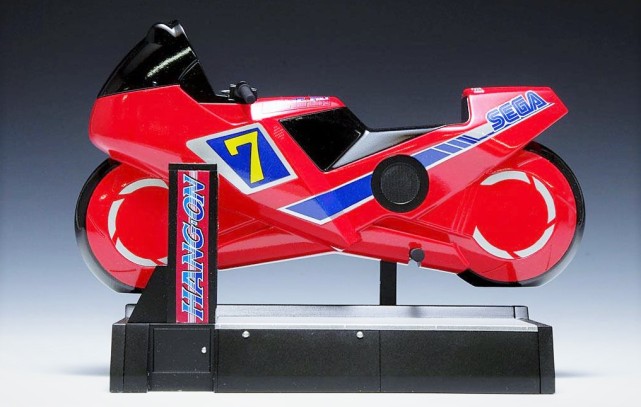 As we just mentioned, the arcades were seen in Japan as dirty dens of vice and the bane of mothers who feared that their children would lower the performance in their studies. Fortunately, the major Japanese video game companies went all out to erase that image and turn Game Centers into leisure centers: cheerful, colorful, bright and welcoming. SEGA was the one that used the most resources in this important mission. Hang-On was born and with it, the concept of Taikan Game -Physical Game-

In his first serious project for SEGA (he had previosly programmed Champion Boxing for SG-1000), Yu Suzuki was determined to create the best motorcycle racing simulator. With his deep knowledge of the motor world and his ability as a designer, he put on the table two non-negotiable objectives: the player must drive from a three-dimensional perspective and the control of the bike must go beyond the simple handling of a handlebar.

A very special cabinet was created thanks to the work of the best industrial designers in the company. With a stunning look -reminiscent of the motorbike from the AKIRA film-, the whole bike tilted left or right at an angle marked by the weight and inertia of the rider’s body. Still lacking hydraulic or electric motors, the feeling and the effect was nonetheless very successful and allowed to perform motorcycle riding techniques, such as the Hang-On which gave its name to the game.

Regarding the game itself, it uses the Super Scaler technique intensively. Designed from the start as a game with a three-dimensional perspective, the position, scale and expansion of all objects was calculated in 3D, then converted to sprites and moved thanks to the very powerful hardware used, consisting of two Motorola 68000 at 10 MHz, a video chip with capacity to move up to 128 sprites and several graphics layers simultaneously.

For the programming work, Yu Suzuki counted on the ability of Coreland Technology, a SEGA collaborator since the great Pengo (1982) which had specialized in this new technique. In a future post we will talk about their later works.

The sound was driven by the new Yamaha YM2203 OPN chip and a proprietary SEGA chipset that allowed for 16 channels of PCM sound. The result: sound played through a four speakers set, stereo effects with strong and outstanding musical composition where percussion finally sounded as such. The composer: Hiroshi Yamauchi “Hiro”, in the first of his works for SEGA.

But enough of cold data. Let’s get on the bike without any further ado and let’s insert the 200 YEN.

The bike control is delicious. Although we do not have any force feedback or vibration, it is very convincing and intuitive, allowing knee dragging at any moment. The five stages are designed so as to harness the potential of the cab. The key to success lies in combining the handlebar and pendulum movements.

Understandably, the bike’s physical reactions have little to do with the real world, but it requires to be tactful in controlling the throttle during tight curves and when passing rivals. In addition, there are some awesome details, such as the rear wheel slide animation when braking too hard or even a sensational 360 degree turn if we go off the track at high speed. 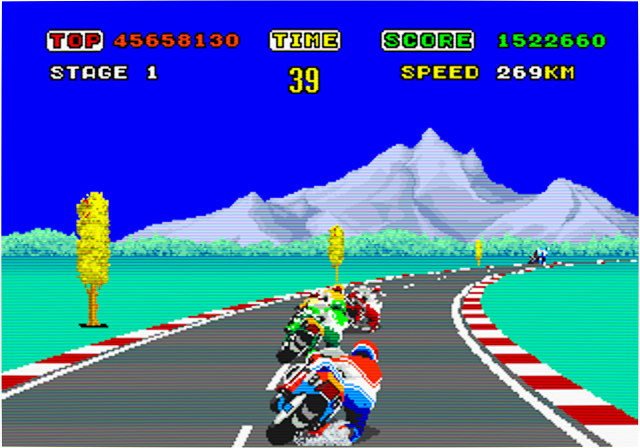 Traditionally, rivals are not just the moving obstacle of other driving games. Although the other bikes have a top speed that is significantly lower, the cadence and position of our opponents varies from a play to play and depending on how we take the curves, which means that each game is different from the previous one. As is still the norm in arcade driving, we start with a time limit, extended as we reach the various check points and which, upon reaching zero, takes us to the iconic game over screen and high score table.

The scoring system became the standard of this genre: the points increased depending on the speed and distance traveled and the number of overtaken rivals, and froze during the time spent out of the asphalt. In addition, the replayability is enhanced, rewarding those players who can reach the finish line with a million points per second remaining on the time limit, thus making it more interesting to achieve the best score at a time when the High Scores competitions were booming in Japan, promoted by the monthly Micom Basic Magazine first and Gamest shortly thereafter.

Simultaneously with the launch of the Ride-On cabinet, SEGA launched a simpler, compact and inexpensive version, which nonetheless also included a handlebar. This sitdown or upright version has an added attraction: the layout of the circuit was completely different, with more variety in the radius of curves and higher difficulty. Almost a different game and by far the most popular in the occidental countries.

A curiosity: at the beginning of 1986 SEGA launched Hang-On Jr. another arcade version, aimed at small shops and reprogrammed for the new low-cost System-E board, a piece of hardware based on the Mark III console. This version has a certain similarity to the original, but with manual gearshift and a graphic style taken from the home version. Worth a try, if only for its difficulty.

As for domestic conversions, SEGA launched soon after a version for its new MARK III/ Master System console. An interesting adaptation, but which obviously had almost nothing to do with the arcade, just like the adaptations to the western 8-bit computers.

All the effort put into the title materialized in a key work in video game history, soon surpassed by later releases, but which will remain forever in the imagination and popular culture as a pioneer.

Check out in glorious 60 FPS our World Record in the Hang-On Ride-On version and the Score and Time Attack runs on the two versions.